"You're comparing Foxman to Hitler, that's kind of..." - "It's an insult to Hitler. Hitler at least didn't do it for money." - Norman Finkelstein 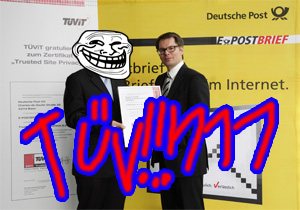 This article is a follow up to Germany's E-Pestbeef. I suggest reading that in case you haven't already.

I found a flyer for Deutsche Post AG's E-Postbrief in my mailbox the other day. I've found some of those there before but always tossed them immediately (with the rest of the advertisement crap I don't need). This time I actually went through it however. The idea was to have a laugh. Instead I ended up raging.

It is just ridiculous what claims they make in there. What upsets me the most is how they try to deceive normal people who have no clue about the matter into registering and using their "secure" system. I will comment on some quotes taken from the flyer. The original quotes are in German and I will include them in brackets after the translated quote. Let's take a look:

Let's say "conventional email" means unencrypted emails then I'd say conventional emails and E-Postbrief are pretty much on the same level. Yes, E-Postbrief uses encryption. But what encryption? We don't know.
Update: Actually this wasn't quite correct to prove my point. It's more like: Who decrypts it? Not you, they decrypt it for you on their system.
Meaning: a third party being not you nor the recipient knows how to decrypt the message. Insecure crap.

Let's say "conventional email" means an encrypted email with GPG/PGP. You created your key, the recipient created their key, there is no third party involved. The message has been encrypted with well known and proven security standards.

Which would you choose now? Of course they're not telling you that, though. This is exactly what makes me rage: they're telling people their system is secure and some who don't really know a lot about the matter will believe and trust them. However in reality their system is NOT secure at all. It's a freaking lie.

Yes, permanently alright. Since once you delete something it actually is not deleted. Securely, huh? Let's see...

DON'T USE THIS SERVICE. I can't say it often enough. It is NOT secure, it is NOT private, it's all a big freaking lie.

Also have a look at this nice list of companies who apparently seem to be as incompetent as Deutsche Post AG (since they are all already using and supporting E-Postbrief).

At least they're maintaining a handy blacklist. Vote with your wallet.

Note: Due to copyright I'm not publishing the whole flyer on here. I have a copy however, in case you want to have a look at it, simply contact me.